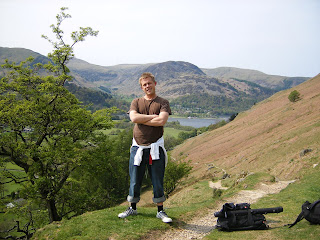 With the cracking weather were having for April, decided to have a bash at one of the Lake District Tarns on Saturday, so after agreeing pre-beers on Friday that we'd set off 1st thing, we finally left Manchester at lunch. The journey up was jam free & we were in the pub a couple of hours later having a swift one prior to the stomp up the fells.

Although only a relatively short drive from Manchester the Lakes feel a million miles away & they always remind you that its well worth the effort to get up there, the scenery more than makes up for the lung-busting hike(pic is of Tom having a breather on route). Upon reaching the Tarn we were encouraged by a few fish rising & closer inspection revealed a hatch of Olives taking place, so we ginked up a couple of Humpy's & cast to the rising trout, the buoyant flies were sitting up perfectly in the ripple.

It didn't take too long for a trout to rise to the fly but, being a bit rusty we both missed a take or two, Tom eventually hooked up first & just as I was taking a picture of him - what timing! (the pic captures his expression perfectly) 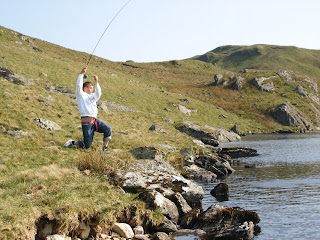 I decided to have a wander down to where the thick reed bed usually meets an area of deeper water, although the reeds hadn't had chance to grow back yet you could see a few shoots breaking the surface - I suppose it is only April!

I think this reed bed & all the fauna it supports must be a reason for the bigger than average stamp of trout in here for a high altitude tarn.

The switch of spots paid off and I was soon into a decent fish, these wildies really do put up a fight. 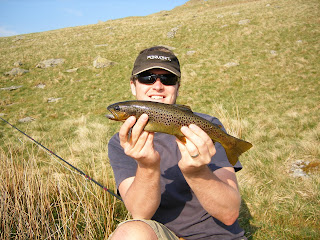 These tarn brownies have adapted to the dark peaty water to become a beautiful olive colour. As we were Ferrel camping that night we decided to keep a couple of the better fish for the pan, the plan was to stay until dark for the evening rise then walk down to the lake to camp but, as we'd left our torches in Manchester and a strong wind had started blowing, we changed plan & headed down before dark set in. 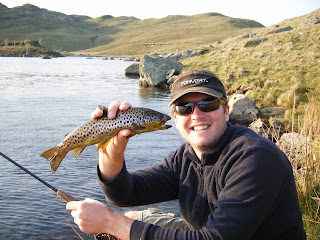 Back at the pub we got chatting to a local who happened to know the kitchen staff, so we asked if he thought they'd cook the trout for us, he wasn't sure as the pub was packed with diners but, it turned out one of chefs was into his fishing and said " if you pop yer head round the kitchen door in half an hour, I'll see what I can do". So for the price of a pint and a chat about tactics we were tucking into a nice plate of trout & chips! 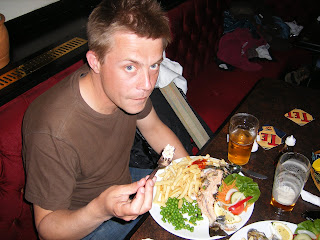 Stayed in the pub till last orders as we'd not got a camping spec sorted but, that's the beauty of the 3 second tent, you can literally roll out of the boozer, find a flat patch of grass & throw the thing up. The nice South African barmaid tipped us off to a perfect guerrilla camping spot just round the lake. We were lucky, with it being a clear moonlit night finding a top spec wasn't too much trouble. 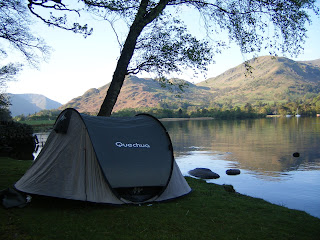 The witching our up there can be sensational.

Mate, this place looks incredible. Is it free water?