As I'd been working in Preston the other day & the weather had been good I decided to swing by the river on my way home, I'd alerted Tom to the possibillity of a session so knew he'd have lugged his waders to work. I got to the water first so tried the nice beat Tom got the Lunker on the previous week - a few fish were rising so I put a gnat amongst them & bagged this beauty! 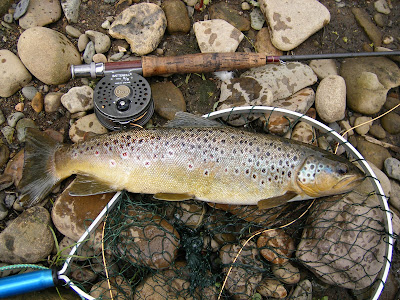 Tom rang shortly after so I bobbed down to the pub to meet up, after showing him the picture of this fish we bolted our pints and headed off for what would hopefully be a top evening of sport. Decided on wading a fairly new stretch(approx 1/4 mile) slowly making our way upstream with dries putting them on all the spots we could see trout holding. We had some great action, hooking into fish all the way along the length - the brownie pictured below being the best of the bunch. 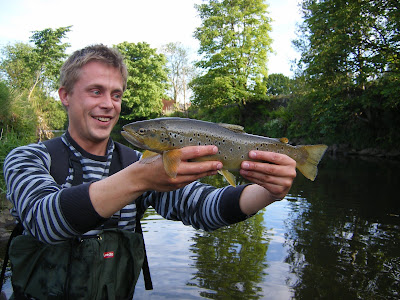 After grabbing some dinner (raided the folks kitchen as no one was home) we headed further upstream to see if we could spot any big trout lurking. Wandering up through the fields I came across my old friend PA who I first started fly fishing with on the river some 15 years ago, after a good chat about all the trout holding places we know, it seems we've been catching the same fish this season! - what a great argument for catch & release.

There was one spot a good walk upriver where PA told me he'd been snapped by a good fish a few nights back, by this time it had started to get dark so on reaching the pool I tied on a comparadun which I could just about see with its white hackle in the dusk. I located a fish a few inches from the far bank undergrowth where it was just sipping off the surface & after sticking the fly in the foliage a couple times I got a nice drift past its nose & hooked into a steamtrain of a fish (pic below). 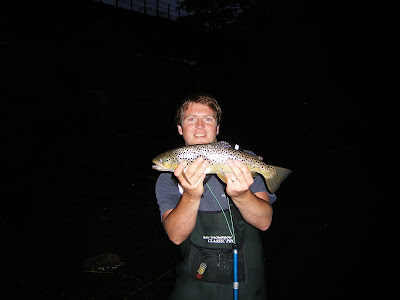 Walking back through the fields I came across a frantic Tom hooked into another good fish, as he was about 6ft above the water & stuck between two bushes it was a good job we turned up to help get a net on it. 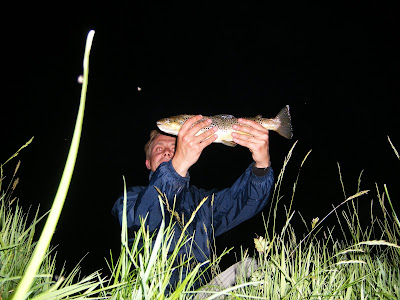