After the heavy down pours over the last few days I wasn't sure what state the river would be in on Sunday as it tends to be quite a flashy river but, plans had been made to get out, so with the lack of a river report(usually courtesy of the folks) I set out with Tom anyway.
On arriving things were looking OK, the level was up & coloured, but not too much - I think this is probably because it's been so dry of late the parched earth had soaked up much of the run off.

Being a true gent I put Tom onto a killer riffle at the head of a glide that I knew was holding a few fish & pretty much strait away he was into a nice brownie. After a good struggle & the usual acrobatics to be expected from these wildies a jubilant Tom was on the bank posing with a real cracker of a fish.

The fish took a humpy - a fly that's proving to be a real winner this season. 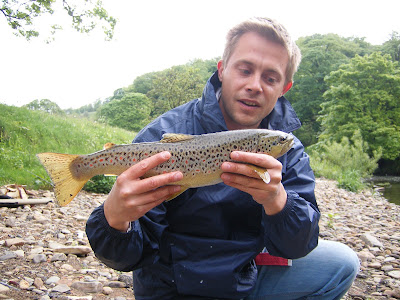 Wandering upstream we came across a good fish just sat in the current sipping flies off the surface, I approached this one & creeping up the bank managed to put my fly a couple of foot in front of it's nose... sure enough the fish took the fly and I was connected to a big brownie. The trout jumped a couple of times revealing huge buttery coloured flanks before tearing off down stream & snapping my tippet.

Gutted but undeterred I spotted another trout sipping down flies below the far bank undergrowth. I couldn't quite get a fly to it, so donned the waders to get a better cast & next time it rose I drifted my fly past where it was holding & was rewarded with a beautiful browie. 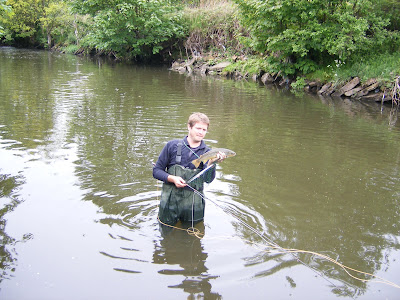 As forecast the rain started mid afternoon & although a few fish were still rising, mainly under overhanging trees, we decided to call it a day and head for the boozer.
Posted by Nick Carter at 20:14