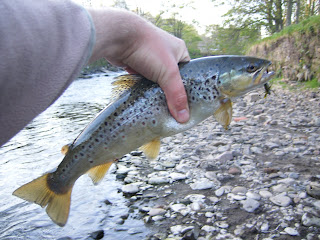 Went up to the river last night to wade a stretch, just as I got in a young lad shouts over to me from the path on the opposite bank to tell me he'd caught a 7lber on a minnow on this stretch(hhhmmm????), he looked most unimpressed with me wafting a size 20 black gnat under the bushes. Though there were plenty of midges hatching there was virtually nothing coming to the surface, so after a couple of hundred yards of no rises & a piss wet right leg(the waders tom gave me are like a bleeding colander - he probably sabotaged them 'cause I catch more fish than him)I tied on a Green Woolly Bugger & fished it like a minnow through some of the deeper glides... & 2nd cast into a likely looking pool, a couple of twitches & BANG we're in! 1st brownie of the season & not a bad fish, took 3 in all but, one had chunk bit out of its back, probably from a Cormorant or maybe one of the Mink I've seen round here.

Stayed over at my mums that night as our kid was over from Ireland with his young family, which meant that I had to kip in the lounge, which was good because I could get up early & go for a fish without disturbing anyone & had to stay up drinking till everyone went to bed... after dropping off watching Matt Hayes fishing for Sea Trout on the Towey I was awoke by my alarm at 6am ready to go & try bag me a lunker. 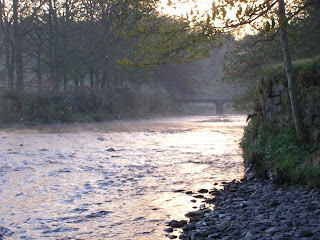 Decided to cross the bridge & walk around the path on the opposite bank to where I was going fish to see if I could scope out any trout & just on a bend as a riffle runs into a nice glide that hugs a steep wall there was a huge fish just sat in the current, with that I stomped back & positioned myself to get a cast at it. I stood at the head of the pool behind the riffle to give me some cover & cast down & across & just let the Wooly Bugger drift down the pool a little to where the trout should be & then jerked it back minnow like, after a couple of casts I got a follow & a take that made the surface bulge like a sub surfacing but, the hook didn't set & with a swirl it was off - B4st4rd!!!. Hoping that I hadn't spooked the pool I persisted, & with a few more casts was rewarded with another solid pull, this time the hook set & the fight was on. This fish kept its head down for a long time and although a good size I didn't think it was the Lunker I was after. 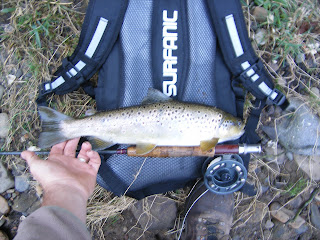 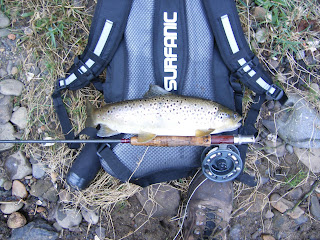 A good few minutes later I finally got it's head up and landed what was definently a PB on the river(the scale shows the fish to be about 40ish cm). With fish returned I set back to grab some brecky & head off for work.
Posted by Nick Carter at 11:46

get your rat out

hi there. loved your blog. my name is anna and i`m a really fit argentinian bird whose family owns a hacienda with countless miles of untouched gin clear trout streams in southern patagonia. i`ve got massive norks too. and i`m better at fishing than that steve eagles guy. wanna hook up?