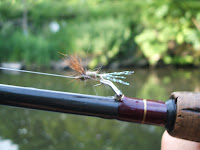 Had a couple of hours wading the river on Monday evening, wasn't sure what'd be doing as it had been 23 during the day & the bright sun was still on the water till 8 o'clock, with this in mind I opted to try some tree covered tunnel like sections. There was plenty of fly activity on the water with a hatch of little up winged Olives occuring which the trout were sipping down in the shaded riffles, so I decided to try out a little Sparkle Dun I'd tied. 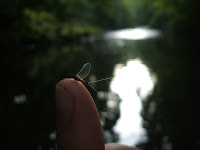 The sparkly tail is meant to represent the shuck of the emerging fly as it sits in the surface film waiting to fly off thus making it an easy & tempting morsel for a waiting trout.

The fly worked really well accounting for all the fish of the evening, I did try a little Deer Hair Emerger but, they didn't seem interested but were quite happy slashing at the sparkle. 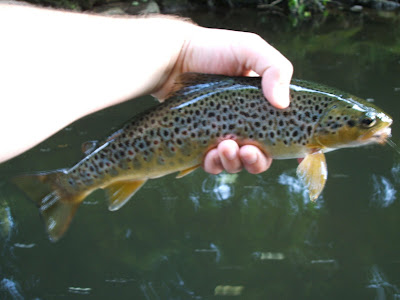 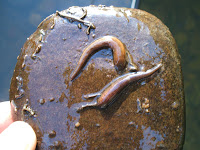 Leeches! - Found these blood sucking little bastards while turning rocks looking for bugs. I should start collecting them & practicing a bit of bloodletting, I believe it's making a comeback in the NHS.
Posted by Nick Carter at 08:50

nice pics! what digital camera do u have?

yeah, was just turning some rocks and came across them - makes you glad you're in waders!

If you could give more detailed information on some, I think it is even more perfect, and I need to obtain more information!
Personalized Signature:金陵热线棋牌游戏中心,名城苏州游戏中心,云南信息港游戏,彭城视窗棋牌游戏中心,江苏互联星空棋牌游戏中心,广西休闲游戏中心,安徽棋牌游戏中心