Just sat at the laptop its half 7 AM & I am buzzing & its not because I've just come back from an all-nighter!
The Brownie that has been haunting me for the last week or so finally fell for a gently glided in Comparadun under a tree at ten past 6. 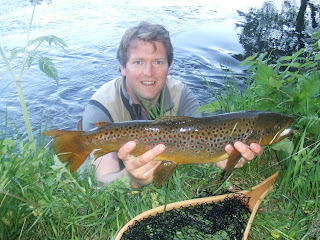 Staying over at mums house as our kid & his family are over from Ireland afforded me the chance to get out on the water first thing. Creeping around downstairs at 5 I was busted by mum, "what you doing up? its five o'clock, you're not going fishing are you?"
"just going to see if that trout's there"
"be careful"
I approached from the high wooded bank where it tends to be stuck in tight to try & get a view, yep, there it was holding in the current coming up for a sip & then doing its patrol up the outside bend of the meander. I then headed downstream to where I could wade across & creep up on it from the opposite bank. After putting so many hours in on this fish I know you can't wade in on him in his deeper glassy glide so I just crouched down covered by the bank & waited for him to reveal himself. Fly ginked, backcast clear I plopped the fly to a rise, SIP, STRIKE... bollocks, not the biggie. Quickly, I brought in a small trout hoping its trashing about wouldn't spook the whopper.

Back to the start, crouching in position, every sound seems amplified in the cold morning, the rip of velcro, the snap of the gink bottle all sound like they could spook the fish. After 10 minutes or so there's a big swirling rise, I cover it  with the comparadun, it floats past... then, SLURP, STRIKE! the rod bends into a solid fish and for the next 10 minutes I'm praying the fly holds as the fish bores up & down the river trying to shake the hook.

Mid fight, I get out the phone, "mum, bring the camera, I've got it". As I'm trying to sqeeze the fish into the net leaning forward, water comes rushing over the top of my waders, just then I see mum coming across the field in her PJ's & wellies - What a great mum! 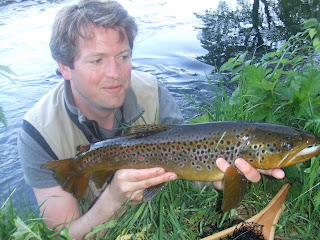 Quality fish Nick. Any idea of the weight?

fook me Nick, that's a belter.

"That trout". What a cracker.

Can't believe you got that in the net! What a result

I'm truly impressed by the brown trout on your side of the pond. Just last week i caught my first natural lunker (not stocked by the Department of natural resources) on the small stream that passes through my buddies property in eastern iowa. Set the hook my friend and if you ever make it to the US look me up for some fishin!

I like your writing style. You are very humorous and a good angler, something I am inspiring to be with my blog. Have a look and tell me what you think.