Returned to the river the next day with my Pike fly set up - a 10 ft 8 weight airflow rod, 8 wt airflow 40+ shooting head line loaded onto a spare cartridge from a cheap greys reel, all bought off the internet for about £60, the rod even has a life time warranty which may prove useful chucking these huge Pike flies around. 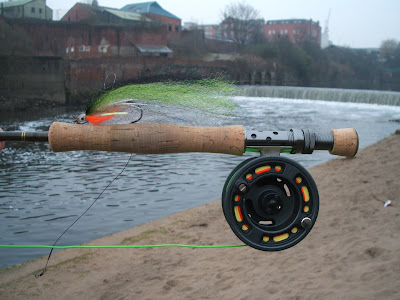 Started punching this big Perchy looking fly out into the tail of the pool, which feels a bit like casting a bath sponge on string when you're more used to chucking out small dries. A few casts later as I was watching the lures action as it neared the bank a decent Pike shot out of the murk and hit the fly, the rod bent double & I was into a fight but, just as I had it beat & was reaching for the net the fish just seemed to open its mouth & let go of the lure. The same thing happened on two more occasions, I think this may be due to the fish grabbing the streamer material and the hook not setting properly - before my next trip I need to look at modifying these flies.

I fished the river today as well, but higher up at The Cliff. Had to give up as there was so much debris in the water it was clogging around the line making fishing impossible.

Did you have similar trouble ?

No, my two sessions were earlier in the week before the pissing rain started again.

It seems a little more than I need to check the information, because I was thinking: Why does not my GLOG these things!