Is it possible to catch a trout on your lunch break in the city centre?

This has been a challenge I set myself this season, that from leaving my desk in central Manchester I can get to the water, set up, fish, catch, tackle down & be back at my desk within the hour.
So far I've had several failed attempts but yesterday I failed my mission in spectacular fashion!

The method to achieve the goal is part spinning class, part Clark Kent style speed changing, single dry fly set up to target a rising fish between 1-2pm when there's a hatch coming off. That translates to10 mins hoofing it across town on the bike, 5 mins to set up, 30 mins fishing, 5 to tackle down & another 10 to get back to the office.

To succeed you'll need a bike, a rod, chest waders, knowledge of the river & a good measure of luck. I would advise caution also, it pays to keep your wits about you as river courses through urban areas tend to be the more secluded places especially the more trouty ones and naturally these out of the way places are a magnet for a variety of miscreants. On a recent failed attempt a 18 stone man looking like a cross between a bad transgender & an escaped mental patient came lummoxing towards me down a cut off bit of river bank in a wig, ill fitting dress & hob nail boots  & was only deterred by me picking up a brick & telling him to fuck off! 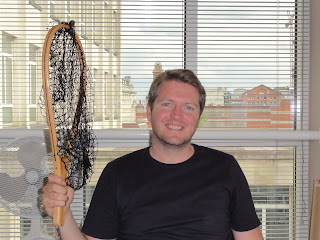 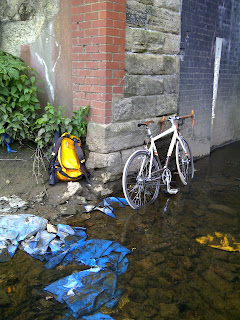 Bike stashed in river for security

So with a weather front coming in on Friday I decided Thursday would be my best chance for while. Following the method set out above I got to a stretch where I'd previously spotted a fish and luckily there it was sipping down upwingeds. On was tied a jingler, a fly that I've been loving ever since Matt Eastham espoused of their effectiveness( http://northcountryangler.blogspot.co.uk/2012/04/not-wanting-to-sound-like-broken-record.html.). First cast the fly was supped down with a large swirl and then all hell broke lose for the next 20 odd minutes as a right chunky brownie tore all over the river. 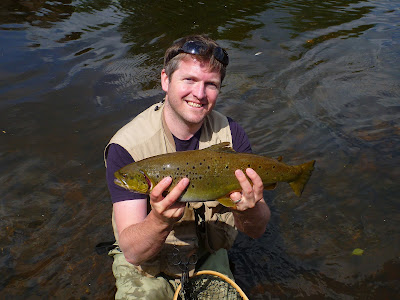 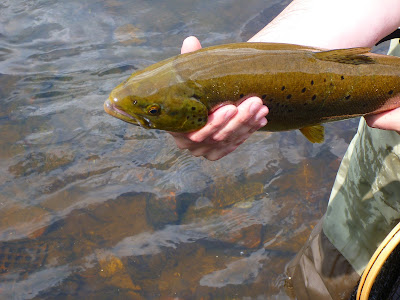 I eventually got back to the office after a hour and a half, completely buzzing much to the bemusement of my colleagues. So again I failed, this attempt my time keeping let me down... Oh well.

That's a stunning fish and from a river that many people who walk past (or over it in most cases) probably think contains nothing much. I still remember walking down a road in the same city centre looking over a bridge - hint: near a station - and being suprised at how clear it was. And how shallow.

Seriously, that's quite an achivement even if it came with a scary moment from the crazy type on the bank!

That's a beaut! Had you got any idea it was going to be that good before you hooked it?

yeah Patrick, I'd had my eye on her for a while

I would have paid good money to have seen that catch - well done!!
...and an excellant excuse for being late - I hope your fellow workers appreciated your achievement.

Best fishing story I read today. When I try to imagine the whole process of day dreaming, planning and preparing prior to the eventual catch, I can only grin widely.